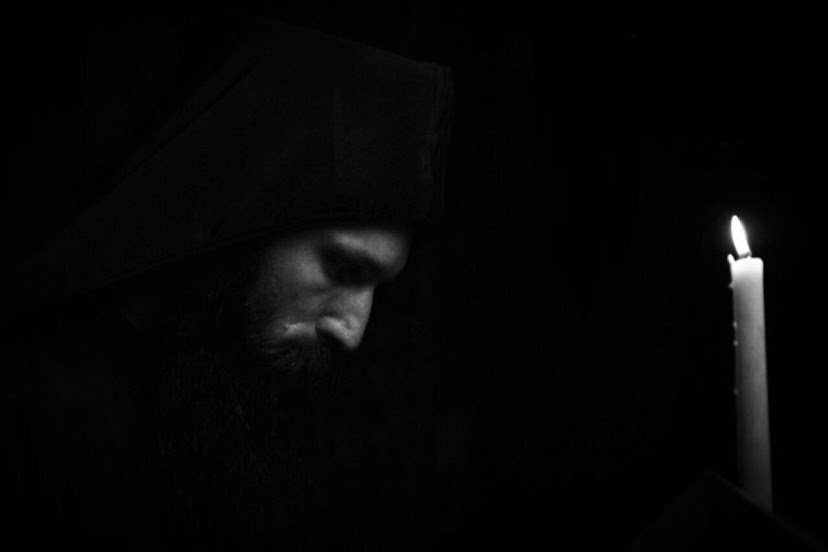 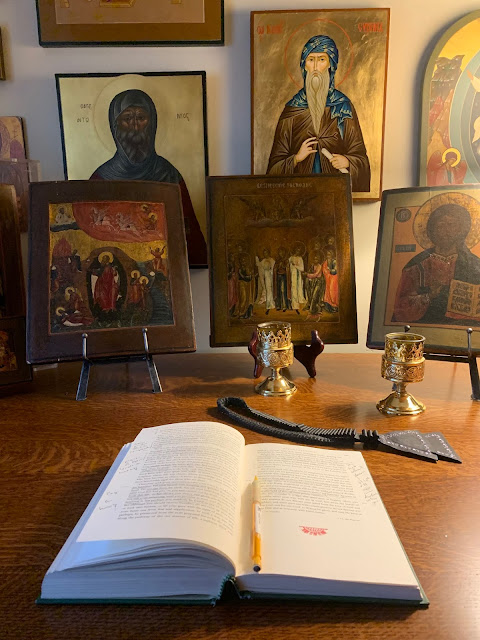 “‘If you love the truth, love silence’ ...if you were going to underline one sentence, or memorize, it should be these last couple...‘If you love the truth, love silence; it will make you illumined in God like the sun, and will deliver you from the illusions of ignorance. Silence unites you to God Himself.’ That is an extraordinary statement...‘Silence unites you to God Himself.’ What would make us want and desire silence more than that thought? That in that silence, as we’ve so often said here before, stealing from a Carthusian, silence allows God to speak a word that is equal to Himself. It allows God to communicate to us in and through our faith, that is beyond intellect, beyond imagination, that allows us to encounter God as He is in Himself. That we are able to experience the love of God but also to be transformed by that love...when we begin to see silence in that way, that’s when we are going to begin to thirst for it and have it be something that shapes our life...silence becomes the way by which we breathe spiritually. Any comments on this last sentence?”
- Podcast, The Ancient Christian Writers Series, September 5, 2019.

The Beauty and Wonder of Orthodoxy The Beauty and Wonder of Orthodoxy

Lord Jesus Christ, Son of God, have mercy on me, a sinner. Lord Jesus Christ, Son of God, have mercy on me, a sinner.

Have Mercy on me Have Mercy on me Never forget your own poverty Never forget your own poverty

Love overlooks the flaws of another Love overlooks the flaws of another

immerlein: Amma Syncletica said: “In the beginning there is... Amma Syncletica said: “In the beginning there is struggle and a lot of work for those who come near to God. But after that there is indescribable joy. It is just like building a fire: at first it is smoky and your eyes water, but later you get the desired result. Thus we ought to light the divine fire in ourselves with tears and effort.”

Dying to Self, Alive to God cassianus: “We don’t understand that this enemy that we have... “We don’t understand that this enemy that we have inside us is not our self; it’s not our personality. It’s only a temptation. This is the seed of the problem of the ego. We unite our personality, which is a priceless event, with our faults. We confuse our personality with our sin; we marry these two things, and we have a wrong impression of what we are. We don’t know what we are, and we need someone to show us who we are; we need someone to open our eyes so that we can at least see our darkness.” - Archimandrite Dionysios

We picked up this evening with homily 47 where Saint Isaac continues to discuss the distinction between natural knowledge and spiritual knowledge. Natural knowledge provides us with the ability to distinguish between good and evil. When we foster this knowledge and embrace it, repentance is born in the heart and we turn more more fully away from our sin toward God. It is then that we can receive the gift of faith through which we obtain spiritual knowledge. Such faith gives rise to the vision of the divine. We see more fully our identity in Christ and the life He has made possible for us. What is laborious and toilsome then becomes light and easy because we are no longer driven by fear or sorrow alone but by love. In Homily 48, St. Isaac begins to take us through various aspects of the spiritual life starting with the necessity of humility in all things. It reaches its perfection when we see our weakness and poverty fully. Along with humility we must foster a spirit of gratitude; avoiding the murmuring disposition that arises when we lose sight of God’s mercy and love. When suffering or when faced with evil we must not lose sight of the fact that God is the Lord of Love and the Governor of History. All things are in His hands despite the evil that so often manifests itself within the world and even the Church.
Posted by Fr. David Abernethy, C.O. at 4:52 PM No comments:

wisdomoftheholyfathers: From St. John of Kronstadt (My Life in... From St. John of Kronstadt (My Life in Christ: Part II, Holy Trinity Monastery pg. 283):
“Let others mock at you, oppose you, when you are under the influence of any passion; do not be in the least offended with those who mock at or oppose you, for they do you good; crucify your self-love and acknowledge the wrong, the error of your heart. But have the deepest pity for those who mock at words and works of faith and piety, of righteousness; for those who oppose the good which you are doing… God preserve you from getting exasperated at them…” ~~Icon of Saints John Climacus, John of Damascus and Arsenius... ~~Icon of Saints John Climacus, John of Damascus and Arsenius the Great

They used to say of Arsenius that no one could understand the depths of his monastic life. Once when he was living in Lower Egypt, and suffering from importunate visitors, he decided to leave his cell. He took nothing with him and said to his disciples, Alexander and Zoilus, “Alexander, you go on board a ship, and you, Zoilus, come with me to the Nile, and find me a little boat that is sailing to Alexandria, and then go and join your brother.”

Zoilus was sad at this, but said nothing, and so they parted, Arsenius went down to the district near Alexandria, and there fell gravely ill. His disciples said to each other, “Do you think one of us has upset him? Is that why he has left us?”

They examined themselves but could not see any way in which they had been ungrateful to him, or had ever disobeyed him. When Arsenius had recovered from his illness, he said to himself, “I will go back to my brothers.”

So he went to the place called Petra, where Alexander and Zoilus, his servants were. While he was by the river bank, he met an Ethiopian girl, who came up and touched his cloak. He rebuked her but she said, “If you are a monk, go to the mountain.”

At these words he was stricken to the heart, and said to himself, “Arsenius, if you are a monk, go to the mountain.” On the way his disciples Alexander and Zoilus met him, and fell at his feet. Arsenius also threw himself on the ground and they all wept. Then Arsenius said, “Didn’t you hear that I was ill?”

Alexander said, “We were upset by your going away from us, for many people were shocked about it and said, ‘they must have disobeyed the hermit or surely he would not have left them.’”

Arsenius said to them, “Yes, I knew that would be said, but now it shall be said, 'The dove found rest for her foot, and so returned to Noah in the ark.’” The feelings of his disciples were healed by this, and they stayed with him until the end of his life.

When he lay dying, they were very distressed. He said to them, “The hour is not yet come, but when it does come I will tell you. You will be judged with me before the judgement seat of Christ, if you let anyone else touch my dead body.”

They said, “Whatever shall we do? We don’t know how to clothe or bury a dead body.”

Then Arsenius said, “I suppose you know enough to tie a rope to my leg and pull me up the mountain?”

When he was about to commit his soul to God, they saw him weeping, and said, “Abba, are even you afraid of death?”

He said, “Yes, indeed. The fear which possesses me now has been with me since I became a monk: and I am very much afraid.” So he slept in peace.

Arsenius always used to say this, “Why words, did I let you get out? I have often been very sorry that I have spoken, never that I have been silent.”

When Poemen heard that Arsenius had departed this life, he wept and said, “You are blessed, Arsenius, for you wept for yourself in this world. Whoever does not weep for himself in this world, shall lament for ever in the next. We cannot escape lamentation; if we do not lament here of our own will, we shall later be forced to lament against our will.”

City a Desert ~ Episode 71: Mark the Ascetic - On the Spiritual Law Part... 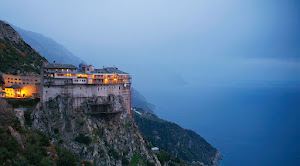 LOVE OF THE BEAUTIFUL

The Philokalia ("love of the beautiful", a love for everything of God, beauty’s source) is a collection of texts written between the fourth and fifteenth centuries by spiritual masters of the Eastern Christian contemplative, ascetic and hesychast tradition. They describe the conditions most effective for learning what their authors call the art of arts and the science of sciences, a learning which is not a matter of information or agility of mind but of a radical change of will and heart leading man towards the highest possibilities open to him, shaping and nourishing the unseen part of his being, and helping him to spiritual fulfillment and union with God. This website is a personal journal of my reflections on these writings and their basic themes. It was 30 years ago, as a young novice of the Congregation of the Oratory of St. Philip Neri in Pittsburgh, that I was first introduced to the Philokalia and have found myself deeply attracted to and profoundly influenced by this spiritual tradition that has been transmitted over almost two millennia. Until recently, most of the writings of the Philokalia were only known in the West by a few specialists, but the hesychast current was by no means foreign to the Western spiritual tradition. St. John Cassian transmitted the doctrine of the Desert Fathers and Evagrius Pontus to the Latin world and was read tirelessly by western monastics and other spiritually serious Western Christians, including St. Philip Neri. These writings are the legacy we receive from the Fathers and our study of them fidelity to the Church’s call over the past fifty years to return to the sources (ressourcement) of the patristic tradition.